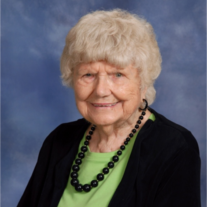 Margaret R. (Marge) Graf, age 100, passed away peacefully on October 7 at her apartment at the Village at Alameda in Albuquerque. She was born to Charles and Nettie Teschendorf on March 26, 1917 in Detroit, Michigan, days before the United States entered World War I.
She grew up in Detroit and enlisted in the US Army in August 1942. She was stationed in England in 1943 as a supply sergeant and eventually moved on to France as the allies advanced. By the war's end she had been commissioned as a second lieutenant.
After the war she met and married US Marine Corps Master Sergeant Glenn Graf of Lockridge, Iowa. They were stationed at various duty stations around the country from Hawaii to Washington, D.C. And raised their three sons eventually settling in Albuquerque in 1953. Other than a short stint in North Carolina they remained residents of Albuquerque until 1967. Marge worked at the Atomic Energy Commission on Sandia Base from 1962 until 1967 when the family moved to Northern California. She and her husband Glenn both worked at Mare Island Naval Shipyard in Vallejo, CA until their retirement in 1978. After Glenn's death, she eventually moved back to Albuquerque to be close to family.
Marge was a member of the Yucca Temple of the Daughters of the Nile as well as a member of the Adah Chapter of the Order of the Eastern Star. She was also a Past President of the Honored Ladies, Widows of Nobles of Ballut Abyad Shriners Temple. She was an active member of St. Paul Lutheran Church.
Marge was an avid traveler always ready for a new adventure. She liked to golf in her retirement and was able to play into her eighties. She greatly enjoyed her card games and was ready for a session of Village Poker right up to the end.
She was preceded in death by her husband Glenn Sr. and oldest son John, as well as her brothers Bud and Art, sisters Eileen, Thelma and Ann. She is survived by her sons Glenn Jr. and wife Lynn of Mt.Pleasant, Iowa , Jim and wife Diane Souder of Albuquerque, grandson Jason Graf (Heather), granddaughters Sara Jones (Robert), Emily Graf and Rachel Graf as well as Great grandson Carson Graf and great granddaughter Aubrey Graf.

To order memorial trees or send flowers to the family in memory of Margaret Graf, please visit our flower store.