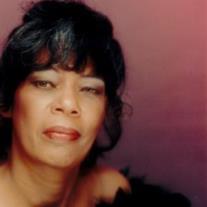 Margaret Olivia Peralta was born on April 1, 1950 in Brooklyn, New York to the late Howard McKinley Newkirk and Mildred Newkirk.  She was educated in the New York City school system.
Margaret married the late Harold Arnold Brown and they had two daughters, Patricia Liddy and Alicia  Brown.  Together, they were also the parents to Vickie, Lori Jean, Keith, and Harold Brown.  Margaret  married for the second time to Jose Peralta and together, they created Julianna Peralta.
Margaret served over 25 years at United Cerebral Palsy as an adult special needs care provider.  She retired from the Albuquerque Veteran’s Administration hospitality services on 30 Mar 2015.
Margaret Olivia Peralta was a selfless, caring, funny, and loving person.  These traits were key to her being a great and devoted mother, sister, grandmother, aunt, and friend to all whom who was blessed to know her.  Her greatest joy was spending time with her family and traveling.  She spoke passionately of her family to anyone who would listen.
Margaret went home to be with our Lord on Oct, 2nd and those she left behind are her children Patricia Liddy (Robert) of Albuquerque, New Mexico; Alicia Brown (Orlando) of Miami Florida; Julianna Peralta (Manuel) of Orlando Florida; Vickie Farrell (Lowell); Lori Jean and Keith Brown, all of Reston, Virginia; and Harold Brown (Nilda) of Bakersfield, California as well as her longtime love, Sidney Dukes of Bronx, New York.
Eight grandchildren, Kiarah Rahman, Khalil Rahman, Patrick Liddy, and Natasha Liddy of Albuquerque, New Mexico.  Olivia Moron of Miami, Florida; as well as Julien, Jaidon, and Jaicob Alvarez of Orlando, Florida.
She leaves behind her beloved brother, Leonard Jackson (Mary); sister, Sylvia (Larry) Roseman of Concord, North Carolina; Dennis (Nadine) Newkirk of Brooklyn, New York; and Paulette (Richard) Lawson of Sumter, South Carolina.
She was preceded in death by her parents Howard and Mildred Newkirk; brother Clifford Newkirk; and sister-in-law, Mary Jackson.
A host of loving aunts, uncles, nieces, nephews, cousins, extended family and friends.

To order memorial trees or send flowers to the family in memory of Margaret Peralta, please visit our flower store.