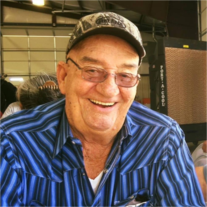 Marvin W. Hunter, Sr. passed away Saturday, October 28th, 2017 after a long battle with lung cancer.  Marvin or “Papa” as his grandchildren knew him was born on March 24, 1950 in Albuquerque, NM. He met the love of his life Lupe Fuentes, 12 years ago, they spent the remainder of his life together.

Marvin was known by many in the South Valley of Albuquerque for his wisdom and fun-loving personality. He had lunch everyday at the Coors Cafe, where many of his friends and family would join him on regular occasion, he was known for almost always picking up the tab. Marvin was know for always being “lovely” rather than “good” or “well” when asked, being known as “lovely” stuck with him throughout his life.

He began farming when he was eight years old and was involved in farming and agriculture his entire life. He enjoyed staying busy on the farm, but would occasionally get out of town for hunting with his sons which he enjoyed greatly. Marvin farmed the largest single section farm in Bernalillo County until his death.

Marvin enjoyed helping those who were less fortunate, and never expecting anything in return. Many don’t know that he would often pay medical bills for those without insurance, give people money when they were in need, and above all was a master of giving wonderful advice, of course always with a cup of coffee in hand.

He was a friend and hero to many. He is preceded in death by his parents Ivan & Hilda Hunter. He is survived by his partner Lupe, his brother Jim and wife Vonnie, his son Wayne and wife Toy of La Mesa, NM and son Jeff and wife Stacey of Bosque Farms, NM, step-children Eric, Naomi, Rosie, and Veronica, 11 grandchildren, many nephews and nieces, and many lifelong friends. He will be missed dearly. He will be remembered for his wisdom, kindness, generosity, and above all the most fun personality that could light up even the darkest room.

To order memorial trees or send flowers to the family in memory of Marvin Hunter, please visit our flower store.