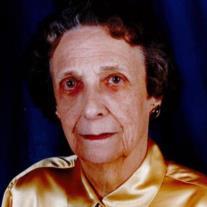 Culbertson, Mary J.
Mary D. Johnston Culbertson died July 12, 2015, at age 103 in Albuquerque, NM. She was born November 28, 1911, in Vincennes, IN, the daughter of Ben and Lucile Johnston. She attended Vincennes public schools and Indiana University. She earned a BA degree cum laude with a major in English literature and followed with an MA degree. As an undergraduate, Mary was a member of Kappa Kappa Gamma and Mortar Board. She was selected by the campus magazine to be the senior class woman student most representative of Indiana University. Mary taught English in Lincoln High School in Vincennes before her marriage in 1937 to James L. Culbertson. In 1941, a daughter Carol was born. When Jim was called to service in WWII, the family moved to Morganfield, KY, and then to Louisville, KY. James L. Culbertson III was born in Louisville in 1944. At the end of the war the Culbertsons moved to San Marino, CA, and in 1952 came to Albuquerque. Jim was a partner in the Emmons Oil Co.; Mary was employed by X-ray Associates. Mary was a member of the First Presbyterian Church and the Kappa Kappa Gamma Alumnae Association of Albuquerque. An avid reader with special interest in composition and semantics, she enjoyed editing books. Mary was preceded in death by her brother, John G. Johnston; sister, Mildred Glover; husband, James J. Culbertson II; son, James J. Culbertson III; and son-in-law, Vincent T. Hoffman. She is survived by a daughter, Carol Tinnin Hoffman, Albuquerque; a granddaughter, Kelsey Jennifer Culbertson, Albuquerque; a grandson, James Lowrey Culbertson IV and his wife Therese, Corrales; grandson, Joshua Robert Tinnin, Santa Fe; great-grandsons, James and Shane Culbertson, Corrales; several nieces and nephews and many step-grandchildren. Mary was grateful for the love of her family and for the warm friendships which so enhanced her life. At her request, cremation has taken place with burial in Fairview Memorial Park, and there will be no service. If desired, memorials may be made to the Animal Humane Association, 615 Virginia Street SE, Albuquerque, NM, 87108 or a charity of choice. To view information or leave a condolence, please visit www.danielsfuneral.com.
Strong-Thorne Life Events Center
1100 Coal Ave SE
Albuquerque, NM 87106
505-842-8800


To order memorial trees or send flowers to the family in memory of Mary Culbertson, please visit our flower store.