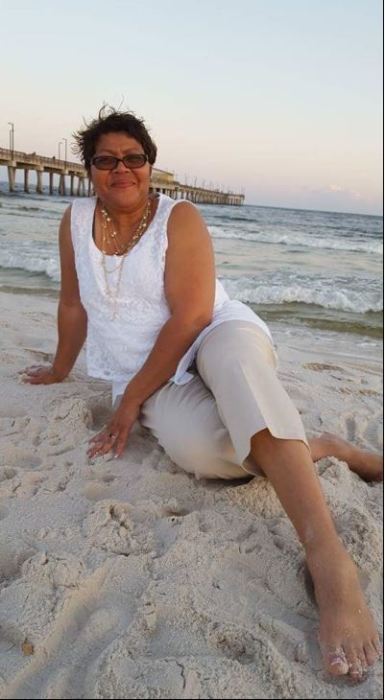 Mary Ellis Wiley was born on October 28, 1959 in Gary, Indiana to Samuel and Maggie Wiley.  Mary attended Gary Public Schools and graduated from Roosevelt High School in 1978.  Mary also continued her education at the University of New Mexico studying Child Psychology, and where she also became a sister to the sorority Sigma Gamma Rho.  Mary was a member of Love Feast Church of God in Christ in Gary, Indiana where she also served as a Sunday school teacher.  Mary was preceded in death by her mother Maggie Lee Wiley on April 28, 2018.

In 1979, Mary married Troy Smith, and from this union were born three children: Kiaunta, Troy, and Ariane Smith.

In 1985 Mary and her family relocated to Albuquerque, New Mexico where she worked at Walgreens, operated and owned her own day care, and did part-time cleaning services.  She ended her career with the State of New Mexico’s Child Protection Services (CYFD) as a caseworker.

Mary was a caring and nurturing person.  She was a good listener and friends sought her advice all the time.  She was an avid reader and stayed on top of current news affairs, along with being an advocate for children.

Mary was a top movie critic, always giving tips on movies she thought were worth watching.  Mary could be the life of the party, hosting many family gatherings at their home.  When the Bid Whist game started, it was hard to beat her and Troy.  They were the king and queen of cards.  Mary was also an excellent player at the game Scrabble.

Mary and Troy loved attending their grandchildren sporting events.  They were some of their biggest critics and cheerleaders.

Mary’s health began to decline in March 2017, when she had a sudden and massive stroke and then was diagnosed with ovarian cancer.  After a little over a year long struggle, Mary departed her earthly life on Saturday, June 2, 2018 and gain wings and her heavenly home.

She leaves to her legacy, a loving and devoted husband of 39 years, Troy Smith, her 3 children: Kiaunta (Phillip) Parnell, Troy and Ariane Smith.

And a host of nieces, nephews, cousins and loving friends.

To order memorial trees or send flowers to the family in memory of Mary Smith, please visit our flower store.