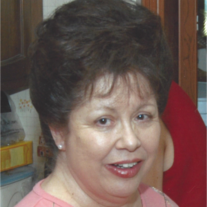 Mary B. Samlin, 75, was called home to our Lord and Savior on Sunday, May 14, 2017. She was born on December 14, 1941 in Albuquerque, NM to Cresencio and Ramona (Black) Saavedra. She was given a lot of responsibility at a young age due to her father's early death. Immediately upon graduating from high school she started her career with the telephone company. Mary transferred to the Bureau of Indian Affairs as a computer operator and then to the Social Security Administration of which she retired from. She was an avid reader and a creative mind who adored her family.

She was preceded in death by her parents. Mary is survived by her husband of 54 years, Gary Samlin, of Tijeras, NM; daughter, Patricia Lynn Ambrose and her husband, Robert, of Edgewood, NM; grandsons, Connor, Aaron and Brendan Ambrose of Edgewood, NM; sister, Estella Liguori, and her husband, Michael, of Albuquerque, NM; brothers, Chris Saavedra and his wife, "Wally," and Charles G. Dusing and his wife, Orlee, both of Albuquerque, NM; and many cousins, nieces, nephews and other relatives. Pallbearers will be Gary E. Samlin, Robert Ambrose, Richard Ambrose, Michael Liguori, Michael B. Liguori, and Connor Ambrose. Honorary Pallbearers will be Aaron Ambrose, Brendan Ambrose,Chris Saavedra and Charles E. Dusing.

Mass of Christian Burial and Resurrection