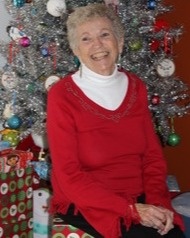 Swank, Mary Alice
Mary Alice Swank, Born Mary Alice Anderson on February 24, 1936, has made her journey home on August 28,2022 after a four-month battle with cancer. She was born in Raton NM, to Listen R. Anderson and Emma Lorraine Anderson. She joins a larger circle of family and friends, her parents, husband Bud, son Gary, sister Nadine, brothers Bob and Theron, dearest friends Bev, Frank and Joan, serval nieces, nephews, brothers-in-law Chet, Howard, David, sisters-in-law Zona, Micky, Joann and Joyce. She is survived by her daughter Traci Lynn Swank-Sanchez, granddaughter Jenna Mari Sanchez, grandson Noah A. Sanchez his fiancée Angelina, the beautiful great granddaughter Jayde Marie Sanchez, whom she enjoyed so very much since her arrival in 2022, son-in-law Kraig A. Sanchez, “daughter” and “son” Vicki Lynn McClelland, Alan Hixon, her best friends Sandy and Douglas Warwick, her neighbors who were true family, Ron and Shannon Daily, and their children troy, Shayla and Savanna. Mary had a rough start to her life here on Earth as she was stricken with polio as a very young age and spent a lengthy part of her infancy and early childhood in the Shriners Hospital in CA where she endured many surgeries on ger legs. She was told she would spend her life using a wheelchair. From the get-go she was a determined, stubborn, and driven person defying all odds and despite her physical barriers she learned to walk and walked with no assistance until she was over 80. Only then did she start using a cane and later a walker and continued to walk until her last days. On June 1, 1951, she married Guy (Bud) L. Swank and they had a great partnership and marriage. They worked together for many years, square danced with friends, spent game nights and camping trips with the family. Due to her polio, she was not able to bare children, so she and Bud set out to adopt in 1964, they adopted their son Gary Dale Swank, and in 1967 they adopted their daughter, Traci Lynn Swank- Sanchez. Mary was a fulltime mom who never missed a field trip, class, or birthday party, Scouts and Brownie troops, being a room mom, a caretaker and ultimately, the best mom ever. While she did all the things a great mom does, she had many part-time jobs like stocking seed packets, stringing heishi, making turquois inlay, newspaper routes. Filling candy machines and many more. After her were older, she took on a job with Albuquerque Board of Realtors where she enjoyed going to work every day. This is where she met her best friend Sandy, and they started a courier business together and id this until retirement. This job allowed Mary to form friendships with many wonderful people. After Bud passed in 2000, after 49 years of marriage, she had the opportunity to travel for several years with her dearest friends Frank and Joan Trembath. She was able to see Scotland, Ireland, Alaska, Hawaii, and many more places. Mary and her siblings had a very strong bond and the love and support showed as her brother, Listen R Anderson, wife Carolyn, sisters Thelma Stump and Joyce Copeland, spent all day with her every single day from the day she was diagnosed and thought out the four months she battled cancer.
Special thank you goes to her granddaughter, Jenna Mari, for being by our side day and night, for stepping up so valiantly, for being herself and being the rock and grandma’s “cookie sneaker” we are so extremely proud of how you showed up for your grandma to the very end. Vicki, for the companionship, laughs, and support you gave mom and me and being on this journey with us “Golden Girls forever”. Heartland Hospice for the care and support they provided during this time, Wilma her nurse and especially to our Angel of Mercy, Jessie. Mary will always be loved beyond words; she will be extremely missed by so many who adored her.
Services will be held on September 23, 2022, at 10:30 Am, Strong Thorne Mortuary 1100 Coal Ave SE 87106 Albuquerque, NM
Mom. Thank you for picking me and allowing me the privilege to care for you in your last years, Traci

To order memorial trees or send flowers to the family in memory of Mary Alice Swank, please visit our flower store.