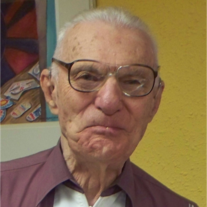 Max was born in New York City on March 4, 1920 to Nissim and Sheby Condiotti, who had came from Turkey at the turn on the century. After high school graduation, Max went to work at a paper factory in Queens, where he was a machinist for the next 30 years.  That is where he lost his hearing and it was a continuing problem as he grew older.  After retirement from that position, he drove a taxi.  In all those years and for the rest of his life, he was very proud that he never got a ticket.  It is an example of how he tried to lead his life – above board, with honesty and integrity.

Meeting and marrying in 1941, a neighborhood girl, Freda Glassman, Max would soon be called to duty in the Army Air Corps, where he served as a courier in Australia, carrying secret papers to the Philippines and with a pistol at his side. At one point the airplane was hit by enemy fire and had to be ditched. Luckily, they were rescued by a seaplane.  He had bouts of malaria, but came out of the war relatively all right.  He went back to New York and a 3-year-old son, Max Jr.  He and Freda a year later had another son, Nelson. Nelson passed away in 1985, in Colorado, much to his parents’ great grief.

In their later years, Max and Freda moved to Albuquerque, where they had a small home.  Max worked for a time even after his retirement delivering prescriptions all over Albuquerque.  As in NYC, he soon learned every street and roadway. When Freda died in 2000, Max moved to Manzano del Sol, where he spent many happy years in an apartment there.  He so appreciated all the activities and good employees there – the garden, the cribbage games.  Max won a cribbage tournament at a local senior center with a “29-hand”, an award he always kept up on his apartment wall.  In the last few years he enjoyed playing poker at the senior center in downtown Albuquerque.

During his years at Manzano, Helen Volkerding was his dear friend. When his son Max and wife Jana would visit from Colorado, they had many good times together going out to lunch and dinner and sometimes visiting the casino.  And games of Rummikub were always in order.

Max is survived by his son and daughter-in-law, Max and Jana Condiotti of Longmont, Colorado, his sister, Sunny Olsen, of Tampa, Florida and six grandchildren, in Colorado, NYC and Indiana.  He is also survived by Nelson’s wife, Linda of Aurora, Colorado and many nieces and nephews.

A memorial service for Max will be held at Manzano del Sol on Wednesday, December 16th at 2 pm in the chapel.  In lieu of flowers, those who desire may make contributions to St. Jude Children’s Hospital, Memphis, Tennessee, 38105.