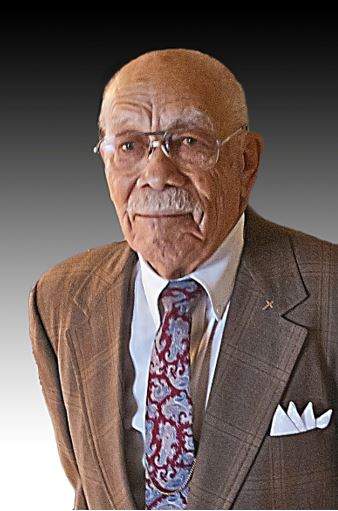 Oscar Cornell Jones was born on July 25, 1920, to Chester Arthur and Ida B. Jones in Caldwell, Texas, and he departed this life on Saturday, June 17, 2018, in his home in Albuquerque, New Mexico, three days after the death of his wife, Nora Pearl Jones, who passed away on Wednesday, June 13, 2018.

After graduating from Smith Graded High School in Caldwell, Texas, he and his brother caught a freight train to Tucumcari, New Mexico, to work in their Uncle Nolan and Aunt Stella Jones’ cafe.

He enlisted in the army where he served 3 plus years and was honorably discharged in Santa Fe, NM.  He moved to Albuquerque and began working for Hull’s Cleaners on Central and ACME Cleaners.  Soon after that he and his wife Laurniece, along with her sister and brother-in-law partnered together to open up their own dry cleaning business which they named Vanity Cleaners located on Broadway and Lomas. They relocated the cleaners to Bridge Street and its final location was at Five Points.

Mr. Jones was a man of quiet wisdom who didn’t mind dispersing it.  He worked hard and put in long hours of hard labor at Vanity Cleaners.  He loved his family and enjoyed his annual trips to the country in Caldwell, Texas, where the family would get together and catch-up, fish and just enjoy each other.  He gave a substantial donation to help pay off a debt at his home church, Goodwill Baptist Church.  He was very generous and liked to help anyone in need.  He especially loved counting out dollar bills to give to children and watching their faces as he counted each dollar out to them.  He loved barbecuing on his homemade barrel and watching people eat it and tell him how good it was.  He loved gardening in his huge backyard, watering all of his fruit trees, tinkering with his four cars and talking about old times with his neighbors.  He loved his bolo tie and his turquoise watch along with his cowboy boots, which he slept in the last few months.  Most importantly he loved his church, Mt. Olive Baptist Church. Even though his age slowed him down the last years, he was determined to go to church as long as he could.

To order memorial trees or send flowers to the family in memory of Oscar Jones, please visit our flower store.