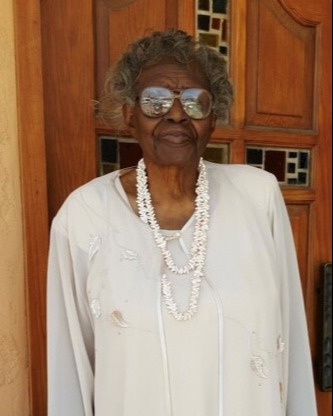 Pair Lee Phillips (Sims) began her life journey on June 20, 1927, she was born unto Lonnie Combs and Nicie Rhodes in Minden, Louisiana. Due to unforeseen circumstances the union ended but her mother met her beloved stepfather Red Sims, and he became her “hero” and raised her as his own Growing

up as a child Pair Lee devoted much of her time to being a mother figure to her eight siblings, she attended school in Minden, Louisiana until eighth grade, however, to help her family she went on to become a homemaker and seamstress. If you knew Pair Lee, you knew that could make something out of nothing. In 1977 she attended Montgomery Wards sewing school where she received her certification of Seamstress. Pair Lee enjoyed cooking and baking she will always be remembered for her dinners that included crispy catfish, delectable greens and finger licking chocolate cake.

In 1945 she met the love of her life Willie Lee Phillips Sr. who she said was the finest dark skin muscular man she had ever laid eyes on. On October 4, 1947, the two joined in holy Matrimony their love was one of a kind and undeniable. Upon settling in New Mexico with their first-born Linda, they add two additional children Kevin and Willie Lee Phillips Jr.  Who now resides with the Lord. She loved and cared for each one of her children in her own special way. She made it her duty to teach her children everything she knew, this included her love for Christ, the ability to cook, sewing and to always be good hearted.

Pair Lee’s faith was the staple of her life, she developed a love for the Lord in her late 20” s. Her walk with Christ began at St. Luke’s Baptist Church, and continued at Mountclary Baptist Church in Albuquerque, New Mexico. While attending these churches Pair Lee knew she had been blessed with the gift from God and joined the choir. She was a faithful member of the choir and could be seen singing almost every Sunday. In her free time Pair Lee loved to tell people about Jesus no matter if you were young or old. Pair Lee could be found volunteering her time singing and praying over the sick in the nearby hospital’s. One of her favorite scriptures was Psalms 23.  Pair Lee was a true example of a God-Fearing Women. She was loved and respected by all who met her. Pair Lee leaves her earthly form as a Proud Member of Metropolitan Baptist Church of Albuquerque, New Mexico.

On December 3,2022 Pair Lee was called home by her heavenly father to redeem her rewards and wings. She is proceeded in death by her parents, her baby boy, her beloved husband of 67 years, her sisters, and her bothers. Those left to cherish her love and memories include her only living sibling Lonnie Hillard of Aurora, CO her loving children Linda (Charles) Smith of Denver, CO and Kevin Phillips of Albuquerque New Mexico. Her grandchildren Patrick Smith of Atlanta, GA LaToya Smith of Aurora, CO Charles (Seneea) Smith of Aurora, CO Mark Smith of Denver, CO Kevin “Austin” Phillips, Aliyah Phillips of Albuquerque, New Mexico, Tabitha Phillips of Dallas, TX and Saadiya Phillips of Atlanta, GA, nine great grandchildren. And a host of relatives, church family and friends.

To order memorial trees or send flowers to the family in memory of Pair Lee Phillips, please visit our flower store.