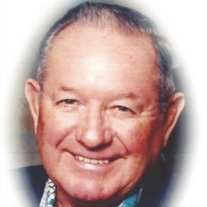 
Sjodal, Paul D.
Paul D. Sjodal, 89, passed away on Thursday, December 22, 2016. Mr. Sjodal was born on October 17, 1927 to Axiel and June Sjodal in El Paso, TX. He was a graduate of Carlsbad High School. He was a stellar student and athlete. He graduated from the University of New Mexico, where he Majored in Journalism and was the Sports Editor of the Daily Lobo. He rightfully earned a Masters Degree which was very rare at the time. A proud Lobo, he was a Scholarship Member of the Lobo Basketball Team and served as President of the UNM Sigma Chi Fraternity Chapter.
Mr. Sjodal led a life of service beginning as a member of Uncle Sam's Army, where he earned Sergeant stripes. He continued his life of service as he was recruited and employed by the Federal Bureau of Investigation,
where his long career included tours of duty in Kansas, Texas, California and New York. He retired in Albuquerque, where he enjoyed Membership in
the Masonic Fraternity, Ballut Abyad Shrine & Ct #24 Royal Order of Jesters, the Retired FBI Agents Association, the UNM Lettermans & Lobo Clubs, the American Legion, the Sigma Chi Alumni Chapter, the Albuquerque Dukes'
Hot Stove League and the Lead Vocalist in the Mori's Bar & Grill (now Copper Inn) Monday afternoons Roundtable. The evening hour of Six O'Clock on Mondays would find him, his fellow patriots and anyone in earshot singing The Star Spangled Banner, God Bless America, and, The Whiffenpoof Song.
Mr. Sjodal contributed a significant amount of time, money and energy to major charitable causes, which ranged from Chairing the original UNM Presidential Scholarship Golf Tournaments, the Michael Martin Murphy New Day Shelter Golf Tournaments, the Shrine Los Compadres Annual Golf Tournament to "anything Lobo" and,
of importance, the 20-plus years he spent driving for Meals on Wheels.
Mr. Sjodal was an extremely dedicated, loving and generous gentleman who made a profound impact on anyone he encountered, but especially to the Valdez, Vigil, O'Toole and McAdam's families. He is survived by the love of his life, Rosemary Rueckhaus, of Albuquerque, NM; aunts, Betty Hamilton and Ruth Hancock, both of Dallas, Texas; loyal canine companions, Duke, Duchess, Liberty Belle, and Sara Smiles.
Viewing and Visitation will be held from 9:30 AM until 10:30 AM with the Funeral Service to begin at 10:30 AM on Saturday, December 31, 2016 at Strong-Thorne Chapel, 1100 Coal Ave SE, Albuquerque. Interment with Military Honors will follow at Sandia Memory Gardens.
To view information or leave a condolence, please visit www.danielsfuneral.com.
Strong-Thorne
1100 Coal Ave SE
Albuquerque, NM 87106
505-842-8800

To order memorial trees or send flowers to the family in memory of Paul Sjodal, please visit our flower store.