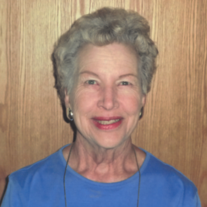 Phyllis Jane (Mauro) Conrad, died peacefully on Tuesday, September 12, 2017, in her home in Albuquerque surrounded by her family. Phyllis was born on September 19, 1939, in Boulder, Colorado, and raised in Ojo Caliente, New Mexico. She attended Santa Fe High School with her life-long friend, Bobbi (Howell) Hine. She later attended college at New Mexico State and began a career in education.  She taught in Ranchos de Taos, Las Cruces, and Albuquerque.  While teaching in Taos, she met her husband of 53 years, Duane Conrad.  She was a devoted mother, raising her two children Lynn and Don. Phyllis was a member of the Delta Zeta sorority, and had served as President of TOPS. She opened her heart to many children and animals over the years as she assisted at places like All Faiths Receiving Home, Friends Feeding Friends, and the Animal Humane Society.  Phyllis loved spending time with her family and friends and had a fondness for sitting around the table playing board games with them.  She took great pride in her children and grandchildren.  She will be missed by many.

There will be a memorial service for Phyllis on Saturday, September 23, 2017, 2:00 p.m. at St. John’s United Methodist Church in Albuquerque, NM, with burial to follow at a later date at the Santa Fe National Cemetery.  Phyllis requested in lieu of flowers, donations be made to the Animal Humane of New Mexico or the Española Valley Animal Shelter.

To order memorial trees or send flowers to the family in memory of Phyllis Conrad, please visit our flower store.