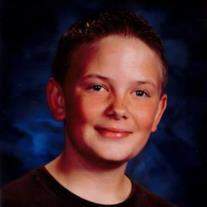 After a valiant 15 month fight against brain cancer, Riley Aaron Rutledge completed his mission here on earth on Wednesday, November 18, 2015. He was born on August 30, 2000 in Albuquerque, NM. Riley will be remembered for his many acts of kindness and for his generous and outgoing spirit. He was a member of the Boy Scouts, and will be receiving the “Spirit of the Eagle" award posthumously. Riley was a gifted trumpet player, and was honored to play with the Madison Middle School Symphonic Band, directed by Elizabeth Van Dyke, as the Honor Band for the 70th Annual All-State Music Festival. He also enjoyed playing with the Madison Jazz Band and played in many competitions. Although Riley was only able to attend the first month of school at Sandia High School before he was diagnosed, he made an impression on everyone he met in his short time. He was a member of the Freshman Football Team, and was just starting to memorize songs for the band. Riley’s hobbies included cheering for the Dallas Cowboys, camping, hiking and he  was known as “one of the world’s luckiest fishermen.” Riley is survived by his parents, Ron and Catherine of Albuquerque, NM; brother, Ryan , of Albuquerque, NM; grandparents, Wiley and Mary Smith, of Rudy, AR; Sandra and Robert Ingalls of Albuquerque, NM; grandmother Patricia Trivett, of Carlsbad, NM; and extensive family and friends
Your browser does not support this video format. You should be able to view it in Chrome, Safari or Internet Explorer.
To order memorial trees or send flowers to the family in memory of Riley Rutledge, please visit our flower store.