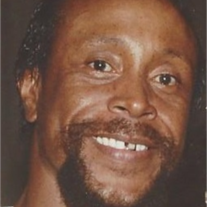 
Ron Powdrell was born January 31, 1953 to Jewell (Sugg) and Mabel Powdrell in Albuquerque, NM.  He was the fourth of five siblings. He was baptized at Shiloh Missionary Baptist Church at the age of 7 where he remained a member throughout his life. Ron was a member of the Shiloh Ambassador’s Baseball Team in the Sixties where he was a star baseball player. He attended John Marshall Elementary School, Lincoln Junior High School, and Albuquerque High School where he graduated (diploma) with honors in both academics and athletics. A major feat in the history of New Mexico athletics, Ron is the only New Mexican high school basketball player to make the ’All American Basketball Team’ two consecutive years. Ron graduated from high school with numerous college scholarship offerings. After attending college, he married Valerie Ingram and with this union born three daughters, Tasha, Tiffany, and Tammara.  Ron worked for the Public Service Company of New Mexico, Southwest Airlines and Executive Desk in Dallas, Texas. Ron was proceeded in death by his loving wife, Valerie Ingram, grandson Jasary, and his mother Mable Powdrell. Ron Powdrell leaves to mourn his death: three daughters—Tasha, Tiffany and Tammara; one son, Deshawn Powdrell; his father, Jewell Powdrell Sr.; one sister, Jane Ellen Powdrell-Culbert; brothers: Jewell Powdrell, David Powdrell, and Gregory Powdrell; nine grandchildren and a host of other relatives and friends.


To order memorial trees or send flowers to the family in memory of Ronald (Ron) Powdrell, please visit our flower store.