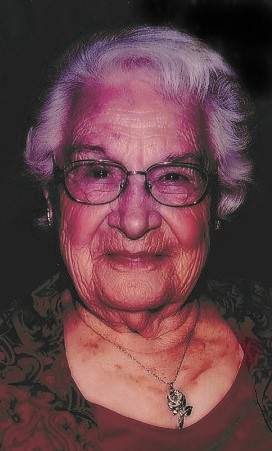 She attended elementary school at the old Ribera School, Ribera, NM, until it burned down, and later at the Loretto Academy in Santa Fe, NM.  Rose had the fondest memories of childhood in rural New Mexico, with many stories she loved to share about her years growing up there.

Rose married Joe E. Valdez, of Raton, NM, in 1940 at Our Lady of Sorrows Catholic Church in Las Vegas, NM, where they raised their three children, Frank, Lucille, and Eddie.

She began work in the 1940’s and was employed for many years at the Navajo Textile Company in Las Vegas, NM, where she made parachutes to support our military aviators serving during World War II.  This began Rose’s never-ending love of sewing.  She made draperies, bedspreads, pillows, and she sewed anything and everything, anyone could think of.

When the family moved to Albuquerque in 1964, she became a devoted member of Holy Ghost Catholic Church.  For over fifty years she was active at her church.  Rose loved to sing in the choir, and was involved in the Rosary Altar Society, Blue Army of Our Lady of Fatima, and many others.  She prayed the rosary daily and said to “Live by God’s grace”.

She cherished her friends, playing cards, and exercising.  Rose participated in the Duke City Marathon 5K walk for several years, (1995-2001) and won several 1st and 2nd place medals for her age group.

Rose loved to care for her grandchildren and great-grandchildren, and cooking meals for her family.  She made the best beans and tortillas!  She was loved by her many nieces, nephews, and godchildren.

We have been blessed to have Rose, a hard-working, independent, and matriarch for our family.  We have learned many valuable lessons she has taught us throughout the years.  Her singing, laughter, and generous and loving heart will be missed dearly.

She is loved and survived by her daughter, Lucille Heshley and husband, Dave; her sons, Edmundo “Eddie” Valdez and Francisco “Frank” Valdez.  Also surviving are her six grandchildren and six great-grandchildren, nieces, nephews, godchildren, and friends, too many to list, but not forgotten.

Special thanks to the loving care Rose received from the caretakers at Willow Wood Assisted Living Home, Albuquerque, NM.

Arrangements for Rose are under the direction of Daniels Family Funeral Services – Strong~Thorne Chapel.  A Rosary will be recited by the Holy Ghost Catholic Church Rosary Altar Society, on Thursday, February 28th, 2019 at 6:00 PM, followed by the Memorial Service by Father Tom Mayefsky, which will be held at the Strong-Thorne Chapel, 1100 Coal Avenue SE, Albuquerque, NM.  Interment will take place on Friday, March 1st, 2019 at 3:00 PM, at the Santa Fe National Cemetery, 501 North Guadalupe Street in Santa Fe, NM.

To order memorial trees or send flowers to the family in memory of Rose Valdez, please visit our flower store.