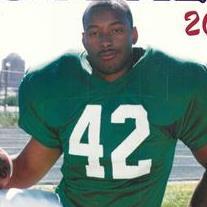 HOME GOING CELEBRATION
FOR
ROZULI HALL
The world is like a shadow that passes by, the world is like a flower that blooms and vanishes away, these words were so well written in song by Elder Ervin Berry, the grandfather of Rozuli Hall who preceded him in death. The cycle of life must be turned over for a new one, like the sands of an hour glass, Rozuli finished one season and embarked on a new one on July 17, 2015.  Rozuli was a recent convert as he gave his life to Christ, to God Be The Glory.
Rozuli was born on April 3, 1983 to Willie Oneta Berry and Robert Lee Hall in Los Angeles, Ca.  He moved to Albuquerque at the age of 9 years to live with his Grandmother, Joylight church Mother Lois Berry of Albuquerque and Aunt Joyce Ann Defreeze now residing in Los Angeles, Ca, who are among his survivors.   He attended Albuquerque High School where he was an awesome football player in the line of defense for The Bulldogs and was an avid lover and fan of sports. He also attended Central New Mexico Community College where he studied refrigeration skills.   He was a big gentle teddy bear that pulled at the heart strings of those who knew and loved him.
Rozuli is also survived by his mother Willie Oneta Berry of Los Angeles, CA, sister Alisa Berry of Los Angeles, CA, Brother Kenneth Pruitt of Las Vegas, NV., Aunts and Uncles Pastor Claude and Mary Bell of Albuquerque, Michael and Alma Pitts of Las Vegas, NV., Ervin and Ann Berry of Los Angeles, CA., Aunt Lois Lorene Williams of Albuquerque and a host of cousins, nieces, nephews, other relatives and friends. Rozuli was also preceded in death by his sister Tammy Pruitt and father Robert Lee Hall.
God has spoken, let the church say Amen.

To order memorial trees or send flowers to the family in memory of Rozuli Hall, please visit our flower store.