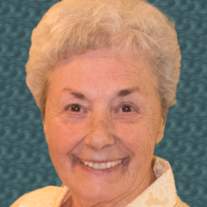 SYDNEY J. GLASS passed away on June 4, 2017.  She is predeceased by her best friend and husband of 60 years, Charles. She is survived by her sons, Louis and Phillip Glass; her daughter-in-law Theresa Grebe, and grandchildren Amanda and Benjamin Glass.  Sydney was an Albuquerque resident for 56 years and an active member of Congregation B’nai Israel.
She was born in Chicago, the only daughter of Louis and Helen Edelstein.  After graduating from Marshall High School, she entered college at the University of Illinois as an accounting major where she met Charles at Hillel.  They married the day after her college graduation.
In lieu of flowers, consider a gift to the Alzheimer’s Association or Congregation B’nai Israel.
Strong-Thorne
1100 Coal Ave SE
Albuquerque, NM 87106
505-842-8800
To order memorial trees or send flowers to the family in memory of Sydney Glass, please visit our flower store.