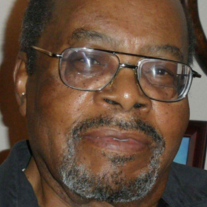 Theodis Jones, Jr. was born in Pine Bluff, Arkansas to his loving parents Theodis Jones Sr. and Leanna Rhodes on October 30, 1931. He was raised in the church and accepted Christ at a young age. He graduated from Merrill High School where he was class president and a member of the National Honor Society. In 1951 after high school, Theodis joined the Air Force where he traveled to many continents serving our country and  retiring in 1971 as a Tech Sergeant. During his time in the military, he met the love of his life LaEtna McNeil of Natchez, Mississippi. They were married in Boston in 1961 and shared this holy bond that lasted for 53 glorious years. During this union they were blessed with four children, Michael L., Kenneth L., Phillip C. and Sandra D. (Jones) Holguin.  In 1971 he retired from the Air Force in Fayetteville, NC, during that time the family moved back to Massachusetts. Ted worked for MITRE Corp. for 20 years. During this time he was elected to Who’s Who among Students in “American Jr. Colleges” in recognition of Outstanding Merit Accomplishments as a student at Newbury Jr. College in the late 70’s. He earned a Bachelor of Science in Management at the University of Lowell in Lowell, MA.  While living in Massachusetts, Bro. Jones was a member of St. John’s Baptist Church and remained a contributing member while living in Albuquerque, NM. During his time at St. John’s he was a trustee, an usher, choir member and chaired several committees.  In 2005 the Jones’ moved to Albuquerque, NM and joined the Shiloh Missionary Baptist Church. The first thing Bro. Jones joined was the Laymen Ministry. He then progressed on as a Trustee of the church where he soon became a part of the Finance Committee becoming the Benevolence Chair. He attended Sunday School on a regular basis and co-chaired the Pastor Search Committee. Bro. Jones also worked on the church by-laws committee and sang in the Male Chorus.  Bro. Jones had a spirit that would light up a room, and whatever he did in his lifetime, he truly did it for the glory and honor of our Lord and Saviour Jesus Christ. His Favorite song was “Precious Lord”, and his favorite verse was Philippians 4:13 “I can do all things through Christ which strengthens me.”He was preceded in death by his parents Theodis Jones Sr. and Leanne Rhodes and one brother DeAutry Jones.  He is survived by his loving wife LaEtna Jones, his sons, Michael L., of Lowell, MA, Kenneth L., of Hudson, NH, Phillip C., of Nashua, NH, his daughter, Sandra D. (Phillip) Holguin, of Albuquerque, NM. His grandchildren, Derek Tanner, Justin Jones, Sharee Jones, Michael Jones, II, Shauna Jones, Marina Partridge, Caitlyn Jones, Phillip Jones Jr, Jeremy  Theodis Jones and Matthew Holguin. His great grandchildren, Jayonna Little, Jacoby Jones, Joshua Little, Quentin Theodis Jones and Jorel Thomas. His brothers, Daniel L., (Delia), Phillip J., (Glenda), Carlton L. (Shirley) and several nieces, nephews and a host of relatives and friends. Viewing and Visitation will be held from 6:00 PM - 8:00 PM on Friday, February 27, 2014 at Shiloh Missionary Baptist Church, 608 Avenida Caesar Chavez SE, Albuquerque. The Funeral Service will be held at 1:00 PM on Saturday, February 28, 2015, at Shiloh Missionary Baptist Church, 608 Avenida Caesar Chavez SE, Albuquerque.  Interment, with full military honors presented by the United States Air Force will be at 10:30 AM on Monday, March 2, 2015, Santa Fe National Cemetery, Santa Fe. To view information or leave a condolence please visit www.danielsfuneral.com
Strong ~ Thorne Life Events Center
1100 Coal Ave SE
Albuquerque, NM 87106
505-842-8800

To order memorial trees or send flowers to the family in memory of Theodis Jones Jr., please visit our flower store.