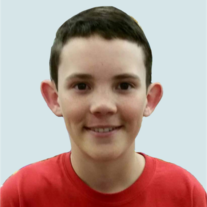 Thomas “Tommy” Patrick Brandt, 13, received his angel wings on September 22, 2017. He was born on March 21, 2004 in Loma Linda, CA to Meghan Brandt and Phil Brandt. He last attended school at Tony Hillerman Middle School. He was diagnosed with Stage 4 Alveolar Rhabdomyosarcoma in July 2016. Despite weeks and weeks of hospitalizations and rare complications he never gave up hope. He continued to dream of joining the military, going back to school, and even riding his bike again. Tommy had a spirit like few here on earth. He was sarcastic, endearing, and without a word – you knew how he felt about something just by the look on his face. He loved playing video games and chasing hot air balloons. He was a member of Boy Scouts Troop 703.

Tommy’s family would like to thank the UNM Children’s Oncology Group, all the nurses in the PSCU and the Children’s Cancer Fund of New Mew Mexico.
To order memorial trees or send flowers to the family in memory of Thomas Brandt, please visit our flower store.