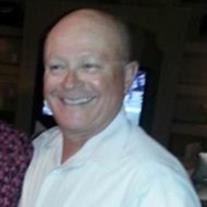 Thomas Patrick Callahan, age 63, passed away at home on Monday, June 22, 2015. Tom was a long-time resident of the east mountains.  He was born on February 26, 1952 to Richard and Hermine Callahan in Albuquerque, NM. He graduated from Highland High School and was drafted into the US Air Force. Tom spent over 40 years in sales in the grocery industry. Most important to him was his family. He was a true "family man." Tom was a loving husband, father, son, brother, uncle, cousin and friend. He enjoyed coaching little league and soccer, as well as collecting antique maps. He was extremely dedicated to the care of his mother, Holly. Tom is survived by his loving wife of 36 years, Virginia "Ginny" (Bieniek) Callahan, of Sandia Park, NM; mother, Holly Boerner, of Albuquerque, father Richard Callahan and stepmother Bernadette Callahan of Albuquerque, children, Joseph Callahan of Cincinnati, OH, and Renee Callahan of Albuquerque, NM; siblings, Chris Acosta of Grand Bay, AL, Jenny Thatcher and husband, Keith, of Austin, TX, Ana Segura and husband, Patrick, of Albuquerque, Cheri Clark and husband Keith of Albuquerque, and John Boerner of Garland, TX, and many uncles, aunts, nephews, nieces and friends who mourn his passing. Viewing and Visitation will be held from 3:00 PM until the recitation of the Rosary begins at 7:00 PM on Friday, June 26, 2015, at Strong-Thorne Chapel, 1100 Coal Ave SE, Albuquerque. The Mass of Christian Burial will be celebrated at 10:00 AM on Saturday, June 27, 2015 at Immaculate Conception Church, 619 Copper Ave NW, Albuquerque. Interment with Military Honors will follow at Mount Calvary Cemetery, Albuquerque. Pallbearers will be Michael Padilla, John Haley, Andre Segura, Paul Anthony Romero, Craig Callahan, and Ricky Roybal. To view information or leave a condolence, please visit www.danielsfuneral.com.
Strong-Thorne Life Events Center
1100 Coal Ave SE
Albuquerque, NM 87106
505-842-8800

Your browser does not support this video format. You should be able to view it in Chrome, Safari or Internet Explorer.
To order memorial trees or send flowers to the family in memory of Thomas Callahan, please visit our flower store.