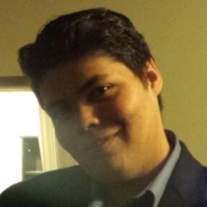 William "Billy" Martinez, 20, passed away on Tuesday, April 4, 2017. He was born on January 30, 1997 in Albuquerque, NM to William "Bill" Martinez and Juliete C'De Baca Martinez. He attended St. Mary's School. Currently, he was a student at the UNM School of Medicine and was an EMT.

He was preceded in death by his grandfather, John T. C'De Baca. Billy is survived by his parents, Bill and Juliete; grandparents, William Ron Martinez, Toni Martinez and Molly C'De Baca; and many other family members and friends. Pallbearers will be his uncles, Ramon Martinez, Gus C'De Baca, John C'De Baca and cousins, Johnathon C'De Baca, Joseph Gutierrez, and Patrick Sais.

The Rosary will be recited at Strong-Thorne Chapel on 1100 Coal Ave SE, April 7, 2017 at 7pm. The Celebration of the Mass of Christian Burial and Resurrection will be held at Immaculate Conception on , April 8, 2017 at 10am at Immaculate Conception Church, 619 Copper Ave NW, Albuquerque. Billy will be laid to rest in the Public Servants Garden at Vista Verde Memorial Park, 4310 Sara Road SE, Rio Rancho.
To view information or leave a condolence, please visit www.danielsfuneral.com.
Strong-Thorne
1100 Coal Ave SE
Albuquerque, NM 87106
505-842-8800

To order memorial trees or send flowers to the family in memory of William Martinez, please visit our flower store.