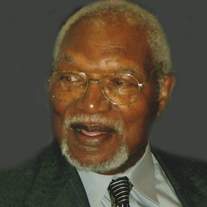 Woodrow “Woody” Jones, Sr. was born to Ora Webb Jones and Alfred Jones on June 30, 1927, in McKenzie, Tennessee, Carroll County. He was preceded in death by his mother, father, two sons (Woodrow Jr. and Ernest), nine brothers, and six sisters.

United in Holy Matrimony with Florence Nell Harris on January 28, 1945, from that union, four sons were born.

He was baptized in the AME Temple Church in McKenzie, Tennessee at an early age. After attending school in McKenzie, he was drafted into the U.S. Army/Air Corp on September 27, 1945 and retired from the U.S. Air Force on July 1, 1968.

After his retirement from the military, he was employed at General Electric for 19 years, and Albuquerque Public Schools as a crossing guard for five years.

After the military, he also united with The Macedonia Missionary Baptist Church. Under the leadership of Reverend W.W. Williams and Reverend N.D. Smith, he served as a church trustee and on the usher board. Woody served faithfully and was a devoted servant to the church.


To order memorial trees or send flowers to the family in memory of Woodrow Jones, please visit our flower store.